THE BLIND MAN OF HOY 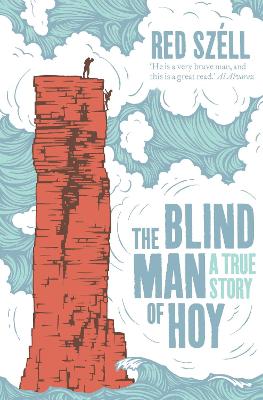 'From the moment I watched a documentary of Chris Bonington and Tom Patey climb the perpendicular flanks of the Old Man of Hoy I knew that my life would not be complete until I had followed in their footholds. That was in 1983 when I was thirteen. Within months I was tackling my first crags and dreaming of standing atop Europe's tallest sea stack with the Atlantic pounding 450 feet below. Those dreams went dark at nineteen when I learned I was going blind. I hung up my harness for twenty years and tried to ignore the twinge of desire I felt every time The Old Man appeared on TV.' Middle aged, by now a family man, crime novelist and occasional radio personality, Red Szell's life nonetheless felt incomplete. He was still climbing, but only indoors until he shared his old, unforgotten, dream with his buddies, Matthew and Andres, and it became obvious that an attempt had to be made. With the help of mountain guides Martin Moran and Nick Carter, and adventure cameraman Keith Partridge, supported by family and an ever growing following, Red set out to confront the Orcadian giant.

Other audiobooks by Red Szell